The Unparalleled Adventure of one Hans Phaall

Flaptekst:
Hans Phaall, a bankrupt bellows-mender from Rotterdam, thinks up an ingenious scheme to get rid of his creditors and to escape from his dreary existence. He constructs a balloon that will carry him all the way to the moon. On the night of 1st April he tricks his creditors into helping him to inflate the balloon. As soon as the contraption is ready to take off, Hans Phaall gives his creditors the slip and kills them in an explosion. The perilous balloon flight lasts nineteen days and is reported in great detail. When the bellows-mender finally lands on the moon he finds a city inhabited by ugly little people. Hans Phaall pines for a return to his planet and sends one of the moon-dwellers to Rotterdam with a letter for burgomaster Superbus Von Underduk. In that letter Hans Phaall offers information about the moon and its inhabitants in exchange for forgiveness for his crime. The messenger arrives in Rotterdam and causes great excitement and confusion among the level-headed burghers. ‘Hans Phaall’ was first published in 1835, when Edgar Allan Poe was twenty-five years old and virtually unknown. The Tale – much admired by Jules Verne – describes an extraordinary adventure in which Poe’s learning and imagination form a hallucinatory mix of science and fiction. For that reason ‘Hans Phaall’ is looked upon by many as the first true science-fiction story. 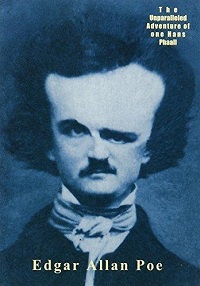